Act IV of 1869 on the Wield of Judicial Power

Act IV of 1869 on the Wield of Judicial Power 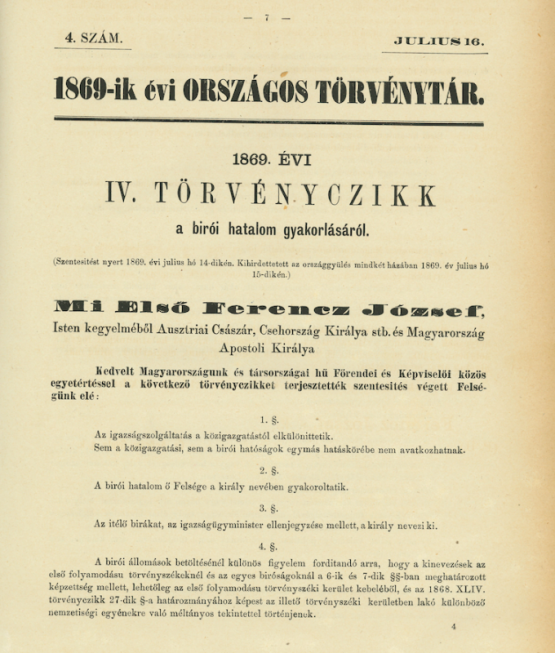 The Act IV of 1869 on the wield of judicial power was promulgated 150 years ago, on 15 July 1869 that is a significant stage of the Hungarian judicature, the first pivot to build the modern court organization.

It shows the act’s great importance that it has separated the branches of power when it declared:
‘Justice shall be separated from the public administration. Neither the administrative, nor the judicial authorities shall intervene in each other's jurisdiction.’

The act regulated the conditions for the hiring of judges and declared the judiciary's independence, which was guaranteed by stating that the judge shall ‘act and judge only in virtue of the law, the decree based and promulgated on the law and the statutory habit.’
It ingrained the immobility of the judges and regulated the conflict of jurisdiction.
The cardinal provisions of this law established the attributes of the Hungarian judicial profession which are still effective today.

The Austro-Hungarian Compromise of 1867 opened the way for building the civil Hungary. Modernizing the legal system appeared to be the biggest task that could establish the basics for changing the social and economic processes.
Boldizsár Horváth said during the debate of the act on the judicial power in the chamber of deputies: ‘the reform of justice has the significance of life and death in a manner of our material and indirect intellectual growth.’

The key issue was the transformation of the state organization and the separation of the branches of power. On this issue the act says the following: ‘Justice shall be separated from the public administration. Neither the administrative nor the judicial authorities shall intervene in each other's jurisdiction.’ This short, laconically brief sentence secures the separation of the judicial and executive power on a basic level and means reforming the state organization, but also guarantees the rule of law.

The legislator solved the issue of the independency of the judicial existence by non-reducible state salary, immobility, fixing the upper limit of judicial activity  in the age of 70, determining the conditions of retirement, prohibition of relocation and restructuring of the organization.

Through the regulatory principles of the conflict of interest the legislator wanted to protect the integrity of the judge. The act wanted to prevent even the conception of negative situations, some of which had an economic nature (commercial, industrial activities, prohibition of accepting gifts, donations, annuities or pensions, exclusion of guardianship or guardianship with asset management), and some connected to profession or office (parliamentary representation, royal notary, lawyer, teacher, lecturer, state or municipal office, service, clerk).

The basic rule of the act is to ban political activity (owning, publishing or editing political journals, membership of political organizations, congregations, workers' associations).
Proof of legal qualification was either passing the bar exam, or the regular theoretical examinations in higher legal education, as well as three years of legal practice and passing the practical judicial examination. This regulation is outstanding, as there had been no standardized professional requirement for judges before.
The act vindicated the fundamental aspects of modern civil justice by its epoch-making regulation and opened the way for the establishment of a domestic court system.

Although the act on the judicial power did not rule specifically on the court organization, it is still the starter of the process that established the modern system. Act VIII of 1871 deals with the liability of judges and court officials, Act IX of 1871 with the procedure for relocation and retirement of judges and court officers, Act XXXI and XXXII of 1871 with the settlement of first-instance courts, Act XXIV of 1874 with the practical judicial examination, Act XXXIII of 1883 with the recess and Act XI of 1885 with the retirement of state officials, subordinates and servants.

Act IV of 1869 reinterpreted the concept of judges in Hungary, as a result a new judicial model was born, who is professionally prepared, whose independence is protected by guarantees and whose professional life is judging and justice.
Today the act is part of the judicial history, however its effect lives on, since it has established the basics of the modern jurisdiction.
The day of the promulgation has been a holiday for the judges and court officials for nearly 20 years, 15 July is the Day of Courts every year.