Taking the lead also in organising trainings – the first, full week-long training of the judiciary’s new generation has taken place at the Hungarian Academy of Justice

Taking the lead also in organising trainings – the first, full week-long training of the judiciary’s new generation has taken place at the Hungarian Academy of Justice 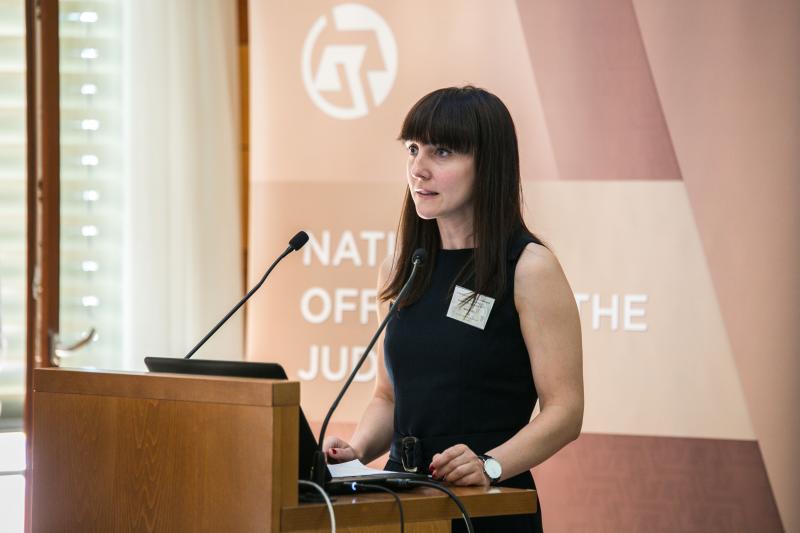 “The Hungarian judicial training system exhibits values that prove to be unique in comparison with other countries” – states Judge Dr. Natasa Fülöp, one of the officers responsible for the professional preparation of the New Generation Trainings. In the first week of February 2019, the Hungarian Academy of Justice organised the first remodelled, full week-long training of judges and court secretaries specialised in civil, economic and labour law.

What is the novelty of the remodelled training scheme? Who belongs to the judiciary’s new generation under the judicial system’s terms?

Within the judiciary, the term “new generation” is applied to trainee judges, court secretaries and judges appointed for a definite period of time, irrespective of their age. Members of Generation Y, born between 1981 and 1995 and members of Generation Z, born between 1996 and 2010 have different employment, informational and training needs vis-à-vis the courts. The members of these age groups usually obtain information about the various aspects of life in a completely different manner. Based on their feedback, they consider trainings in smaller groups and based on a workshop methodology the most useful way of learning, therefore they are to be trained in small groups – instead of being subjected to direct lecturing – and through interactive methods. Since they are digital natives, a developers’ team has also been set up during the elaboration of the concept of the new training scheme.

What kind of new stock of knowledge is provided for the participants by the New Generation Trainings?

If we think about what makes a good judge, then we qualify a person as such based not only on his/her knowledge and competence in substantive and procedural law, but also on the basis of many other characteristics that cannot be learnt from textbooks. A judge’s traits are to be nuanced by a number of additional factors: the evaluation of his/her performance also depends on the way (s)he communicates with the clients, whether (s)he is able to ensure a calm atmosphere in the courtroom, whether (s)he is able to deliver judgements that are understood and accepted by the parties, the way (s)he organises his/her work and whether (s)he has a motivating and inspiring personality. The ideal of the good judge is therefore linked to many skills on which less emphasis has been placed so far under the classical training methods. Hence, we do nothing more than make the participants of the trainings more aware of the importance of the improvement of such skills. We provide them with interactive tasks to enable them to practice communication skills, the ability to focus on the essential issues, comprehensive thinking, team work and work organisational skills.

Who provide such trainings for the judiciary’s new generation? Psychologists or judges with a professional mental health qualification?

Psychologist, trainer and adult learning expert Mária Simon – who had already been dealing with the development of trainings at her previous workplaces – has been entrusted, by Dr. Tünde Handó, President of the National Office for the Judiciary, with the specific task of introducing a new approach in the training of the members of the judiciary. The trainers of the New Generation Trainings are now recruited from among judges and better prepared court secretaries. The National Office for the Judiciary organises trainings and workshops for them at which they can familiarise themselves with the interactive training methods and the techniques of handling small groups and managing workshops. Thus, they do not need to be psychologists, as it is sufficient for the trainers to use the training methodology from a slightly different approach.

Another novelty is that our trainings specifically focusing on the development of skills and soft-skill capabilities are not held by outside experts any more – it is true for both our new generation trainings and management trainings. Judges and court secretaries who felt keen on and being talented in giving trainings could complete a coach-trainer course. The Network of Judicial Coaches and Trainers is now composed of many talented and dedicated colleagues who are able to hold trainings, on their own, on stress management, time management, the development of decision-making capabilities, recreation and motivation. It is a major step forward that the judiciary has its own internal specialists in these fields.

Is this approach a Hungarian characteristic, or do we follow foreign models?

These training methods have already been introduced at Western universities, since the interactive manner of the transfer of knowledge is far more efficient. On the other hand, the renewed Hungarian judicial training system can exhibit values that prove to be unique in comparison with other countries. For instance, we have been holding simulated court hearings for training purposes for a number of years in Hungary, while they are rarely used in many other countries. Moreover, the Hungarian method of involving not only judges but psychologists as well in judicial trainings is an example of good practice referred to as such by the majority of our foreign colleagues that is not known by them.