With the formation of the Buda Central District Court’s unified investigative group, a major organizational improvement has happened, which fits into the reforming process running it’s course at the Budapest Regional Court since 2012 organically – said Sándor Fazekas dr., the president of the Budapest Regional Court at the presentation ceremony. Tünde Handó dr., the president of the National Office for the Judiciary and Péter Polt dr., the Prosecutor General of Hungary were also attending the press conference. 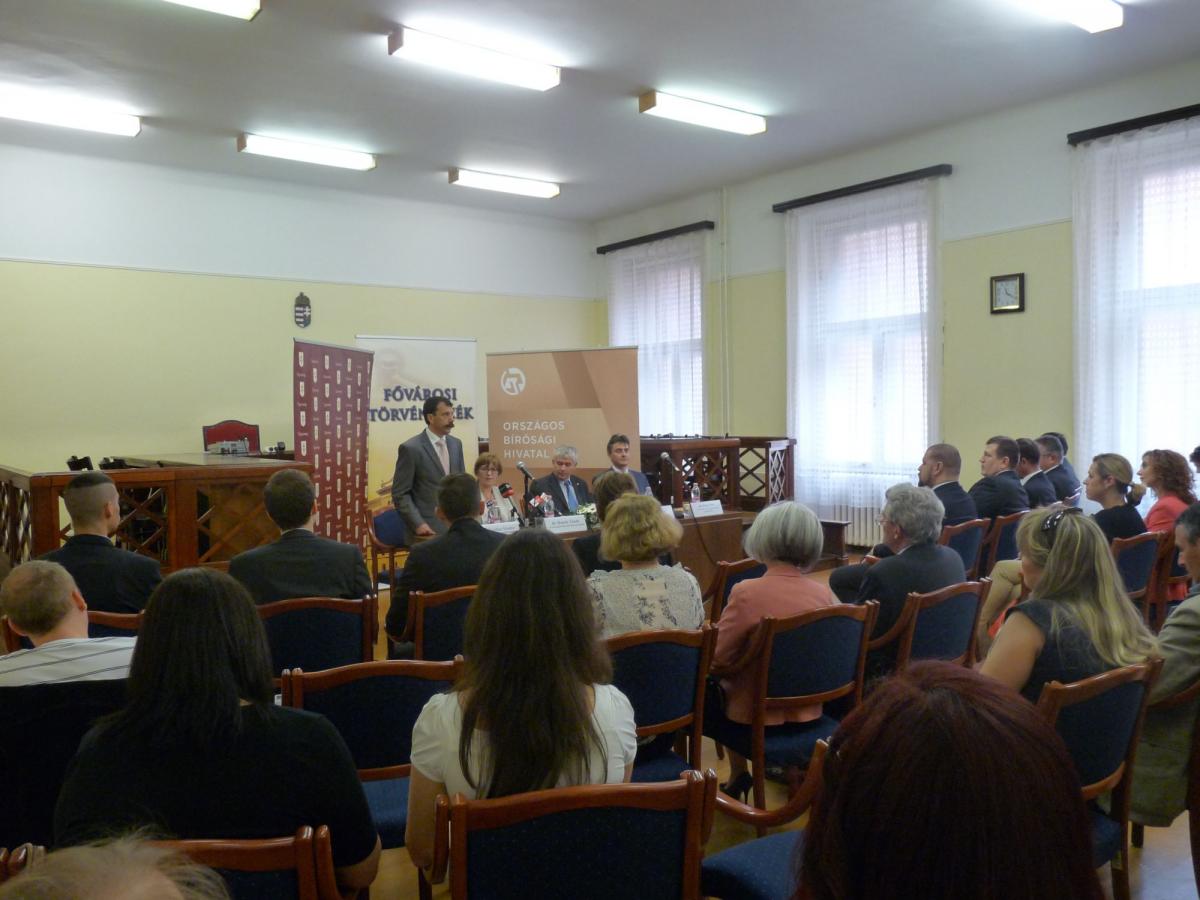 Sándor Fazekas dr., the president of the Budapest Regional Court highlighted in his greeting speech, that the presentation of the unified investigative group makes the work of the judges and the courthouses way more efficient. It rises the standards of performing tasks, helps the citizens to get administration in appropriate deadlines and the judicial workers to keep the timeliness. He said that the institution of the investigative judge is present in the hungarian legal system from june, 2003. The legislation gave the investigative judge 25 or so – very significant – powers built in the investigation process dominantly, which allow them even to restrict fundamental rights during their decision making process. He stated as an example that the investgative judges decide themselves about ordering the continuation of the investigations closed since 2003. There can be only perquisition at law firms, notary offices and in health institutions following their decisions, they decide about secret data acquisition and secret information gathering and they conduct the hearing of witnesses under the age of 14. Most importantly the application of law by the investigative judges has to be unified, calculable and equal all over Hungary. It became possible at the Budapest Regional Court to perform the tasks in a centralized organization instead of performing them at two separete courthouses, like it's used to be. The president of the Budapest Regional Court emphasized that this remarkable change couldn't be achieved without the co-operation of the National Office for the Judiciary and the prosecutor system. He rendered thanks to Péter Polt dr. prosecutor general, who supported his idea from the beginning, to Tibor Ibolya dr. metropolitan prosecutor and to Krisztián Eperjes dr., secretary general for the Prosecutor General's Office for their help in the execution, as well as to Tünde Handó dr. for her contribution to financing.

Péter Polt dr. emphasized that this event is not just of technical kind, there is much more to it. Brakes and balances have to work in the state system serving objective justice, which's one guarantee element is the investigative judge, so the circumstances for it's decisions have to be provided. With the present collaboration some circumstances have been improved so that faster and more efficient decisions can be expected. The institution of the investigative judge is also important for the prosecutors, because it is part of the criminal impeachment and it plays an essential part in matters regarding fundamental rights.

Tünde Handó dr., the president of the National Office for the Judiciary said that the work of this new department seems easy, but it has major significance, it is outstanding because of the occurence of questions regarding fundamental rights. The responsibility of the investigative judge is extraordinary, as seemingly simple decisions have to be made circumspective, only knowing reasonable suspicion. She highlighted that the video-hearing system presented a month ago at the Pest Central District Court can be finally applied in practice.