Balkan and Euro-Mediterranean Network of Councils for the Judiciary

Balkan and Euro-Mediterranean Network of Councils for the Judiciary

The aims and objectives of the Balkan and Euro-Mediterranean Network of Councils for the Judiciary (BEMNCJ) is to improve cooperation among its members with the organisation of conferences, distribution of questionnaires and exchange of experiences and good practices. The international network shall operate with an elected president, a secretariat and a board consisting of five representatives from the members of the network.

The Balkan Cooperation started in 2006, and it took the form of an organization in 2014. In the beginning, it was characterized by the sequence of conferences held annually. Most of the participating states were regularly present at the conferences, but the sphere of members was not constant. Participating bodies were given the opportunity to demonstrate their legal regulatory actions and practice focusing on a given topic. On each and every conference, a statement was made about the importance of the question of judicial independence.

The topic of the 8th conference held in 2013 in Rome was already the formation of the organization. The participants established a working group for the creation of the charter. The charter was signed at Bucharest conference in 2014 which founded the Balkan and Euro-Mediterranean Network of Councils for the Judiciary.

The National Office for the Judiciary is a member of Board and operates of the Secretariat of the network as well.

Further information and the official website of the BEMNCJ is available here. 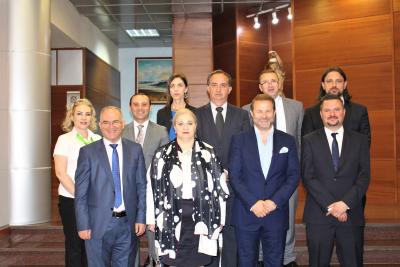