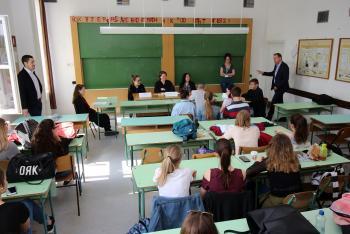 The Open Court Programme, initiated by the NOJ in 2012 for social responsibility purposes in order to facilitate the judicial career orientation and law-awareness of the new generations, completed its sixth successful year.

This programme with colourful content and methodology that is realized with the wide-scope, active and create contribution of the courts attracts tens of thousands of people every year.

In 2017, the number of events and participants kept on increasing: 58 710 pupils participated in 2 326 events and 1 677 judges, secretary judges, trainee judges and judicial employees contributed.

The main target group of the programme has been continuously expanding, beside the high schoolers gradually involving the students of the tertiary education, with special view to law or justice students and the upper classes of the elementary schools. The programme is also present outside of public education as vulnerable groups are involved, too, such as handicapped people, pensioners, minors in juvenile facilities and people working in neighbouring fields such as social and health care sector, child protection and education.

Certain programmes, such as the “Night of the Courts” are promoted to an even broader public, while in other cases the programme was connected with other initiatives that also broadened its target group (e.g. at festivals).

In the scope of this programme the participants can listen to presentations on legal matters of concern, there are opportunities to be present at court hearings that may be supplemented by a preparatory or discussing lecture for the better understanding of the justice system. When court buildings are visited, the administration of justice is in focus. Moot courts more and more frequently included in the programmes very much liked by the youngsters. A moot court means the simulation of a fictive case, of a tale or of a work of literature in court surroundings with the interactive participation of the students.

By using the ideas of the contributors, the scope of the programme is continuously expanded by other events, such as “Night of the researchers”, “European Day of Justice”, “Authentic court hearing based on archived documents”, “Performance of a theatre play concerning legal history”, “Children rights ROADSHOW”. The career orientation, beside the internship programmes, is supported by other initiatives, such as an essay competition for high schoolers or moot court competitions.

The courts pay extra attention to the needs of target groups when realizing the programmes. The programmes concern almost all fields of law but the following topics interest the audience the most: liability and rights of minors, matters concerning them, such as internet, social sites, narcotic drugs. The programme includes some law-realted topics of the high school-leaving.