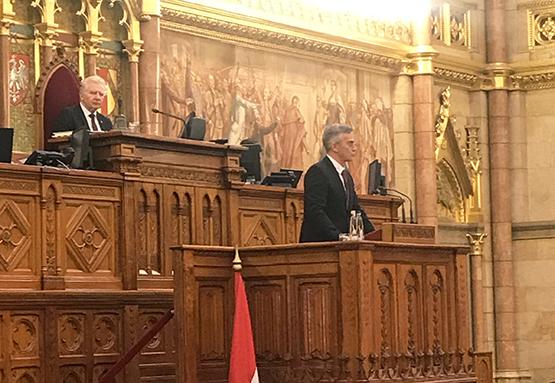 On 6 May 2020, Dr. György Senyei, President of the National Office for the Judiciary (NOJ) reported to the Parliament on the general situation and administrative activity of the courts in 2018.

The President of the NOJ highlighted that the case backlog has further decreased, as the courts have completed a higher number of cases than received on all court levels. 86% of cases have been completed within 1 year, clearly indicating the timeliness of justice. Regarding the well-foundedness of court decisions, 91% of judgments in the civil branch, and 80% of judgments in the criminal branch became final at first instance, and the rate of repealed cases has decreased in both branches.

The rules of judicial procedures have changed substantially in 2018: the courts have transitioned to the use of the three new procedural laws (Civil Procedure Code, Administrative Procedure Code, Criminal Procedure Code) without any issues. Electronic procedures and e-administration were given priority in 2018, since the law has enlarged the range of case types where electronic communication between the court and the parties is prescribed. As a result of court digitalization, remote hearing has been made  possible in 72 courtrooms, and since then, as the system has been expanded further, its role is even more appreciated in the current state of danger.

The justice committee proposed that the plenary session accepts the presidential report, the Parliament will vote upon the motion at a later date.