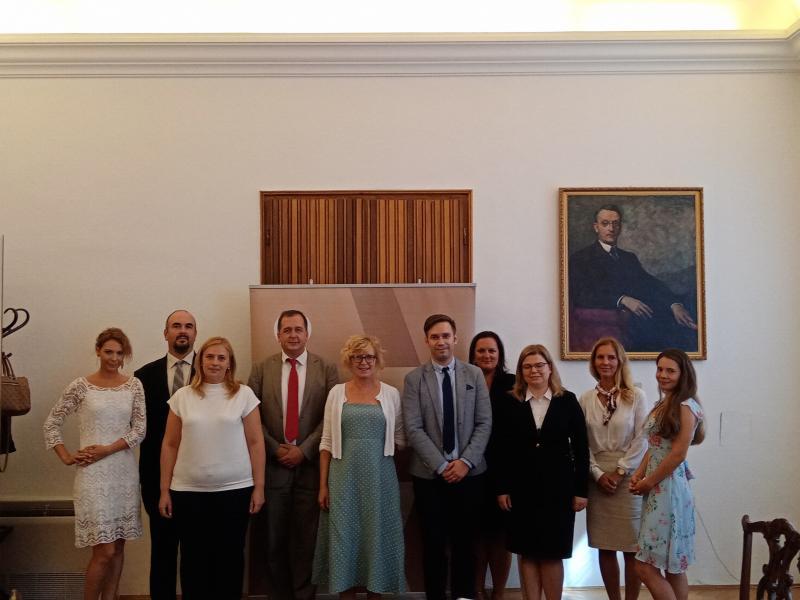 A Werbőczy Mundus scholar will spend his internship at the European Court of Human Rights (ECHR) in Strasbourg for the first time in history. Starting in September a Hungarian lawyer will spend several months at the Strasbourg-based European institution along with his fellows working at the Academy of European Law (ERA) in Trier and at the Court of Justice of the European Union (CJEU) in Luxembourg. The scholars met in the National Office for the Judiciary (NOJ) before their journey, where the returning colleagues shared their experiences.

‘Hungary is a lawyer nation, which has been recognized by many countries throughout history’, said dr. Tünde Handó, president of the NOJ at the opening of the meeting. She emphasized the tradition started during the time of King Matthias in the 15th century, that the most talented masters travelled to Italy in order to train themselves and then returned home to use the acquired knowledge in Hungary. The NOJ wished to carry on the same approach by launching the Werbőczy Mundus Scholarship program.

Tünde Handó mentioned the eponym of the scholarship, judge royal István Werbőczy started his career as a travelling student as well. She reminded the scholars travelling abroad that they represent Hungary, therefore the traineeship can be considered as a diplomatic journey.

The returning scholars of last semester – dr. András Tóth, judge of the Pécs District Court
and dr. Margit Anikó Vadkerti, court secretary – shared their experiences abroad. Dr. Veronika Guba, judge of the Budapest-Capital Administrative and Labour Court also gave insight of her nearly one year spent at the ECHR in the frame of the EJTN Long Term programme.

Just like in recent years, the Werbőczy Mundus Scholarship takes five months. During this period till February, scholars will get acquainted with the work environment of the host institutions, improve their professional language skill and knowledge of European law.